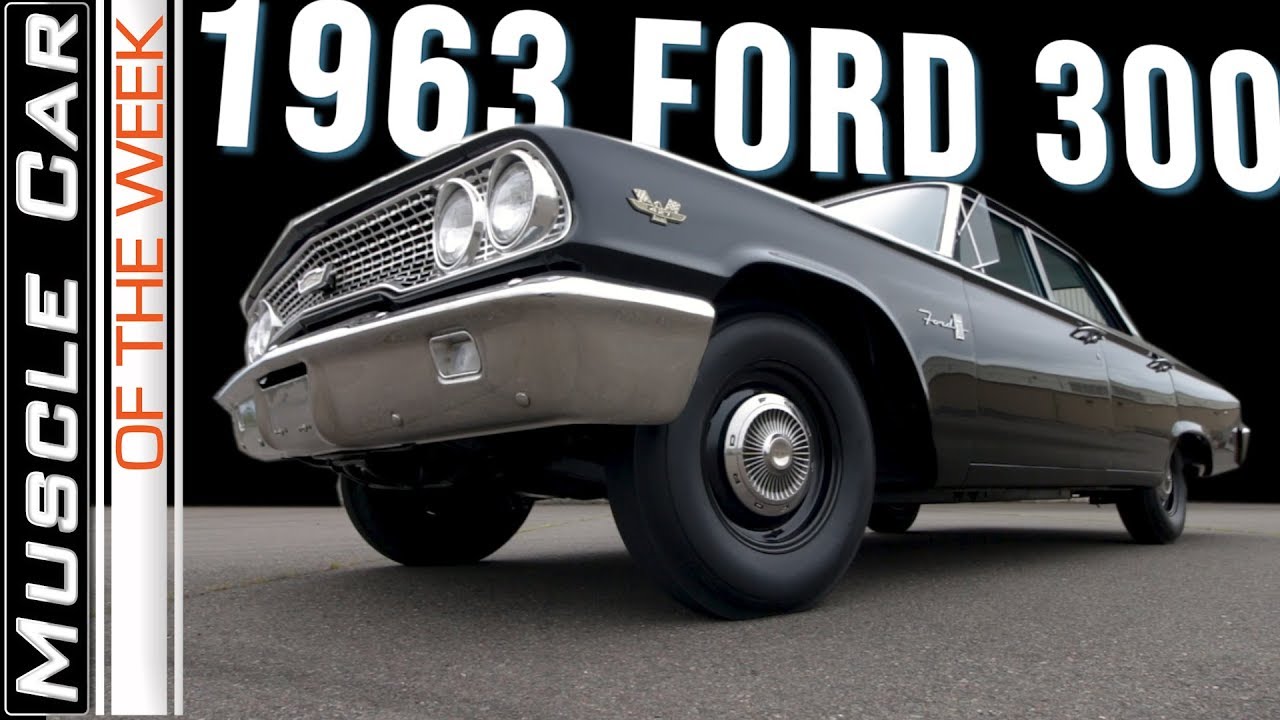 We normally don’t associate high-performance 1960s cars with having 4 doors, but we also don’t see many 1960s 4-door sedans powered by high-compression, dual-quad fed 427s with 4-speed hanging on them from the factory! Well this is just such a machine.

And we have to correct ourselves already… we called this one a “Custom 300” in the intro, but in fact, Ford’s low-price entry in the full size field was just named the 300 for 1963, a name used for a single year model, even though low-price full size Fords had been around for decades.

The 300 shared the chassis, suspension, drivetrains, and other basic structural elements with the flashier Galaxie and Galaxie 500, but it was far more bare-bones, without fancy trim or other luxury items. Most were straight six or small V8 powered with manuals on the column. 300s were slab-sided sleds sold in several solid skins set off by 3 selections of seat stain. Some suggest it’s short on style, but we think simple is solid when it’s served with serious steam.

300s were also used largely in fleet vehicle trim, ranging from taxicabs to police cars. Interestingly, Ford had several levels of Police Car trim offerings in ‘63, ranging from the 138 HP six-cylinder Deputy model designed for “General Purpose” police work, the Police Sentinel, with it’s small block 260 V8 making 164 HP of law enforcement power, the 352 powered Guardian, for “all around” police work, up to the 330-hp 390 powered Interceptor versions, far more capable of chasing down bad guys on their way out of Mayberry.

But our 300 is even more than that, although we really don’t know if it ever served in a municipal capacity. The black and blue color scheme sure looks official. 300s could be ordered with any of the Ford V8s, including the 425 HP 427, no matter how many doors it had. We’re not exactly sure how many of these were built, but it’s not many.

Inside, this 4-door 300 is as bare as they come, with giant flat bench seats, crank-up windows, minimal trim, and very few amenities. This one sports an AM radio and a heater, but perhaps the most important feature is the 4-speed shifter in front of the bench seat.

Outside, the only indicator of this beasts potential is the little 427 badge on the fender, which almost seems like a gag when you look at this basic 4 door box. But opening the hood is no laughing matter, as you are stared-down by a high-strung big block Ford FE engine breathing through dual 4 barrels atop a mid-rise aluminum intake, high-flow heads, a solid lifter cam, and snarling through header-like cast iron exhaust manifolds. This one has a few chrome touches beyond the valve covers, like the radiator expansion tank and the fan shroud, but nothing looks upgraded from stock. Manual brakes and steering add to the experience of keeping this flying brick on course.

It does have heavy duty suspension and oversized drum brakes behind 14” stamped steel wheels wearing conservative hubcaps. The rear axle is a tough 9” unit managed by heavy leaf springs and shock absorbers, but a canon-carver she ain’t. But that park bench seat discourages high-speed turning maneuvers, no matter how hard you white knuckle the steering wheel. But this one shines in a straight line, and no doubt ranks as one of the top sleepers in The Brothers Collection.