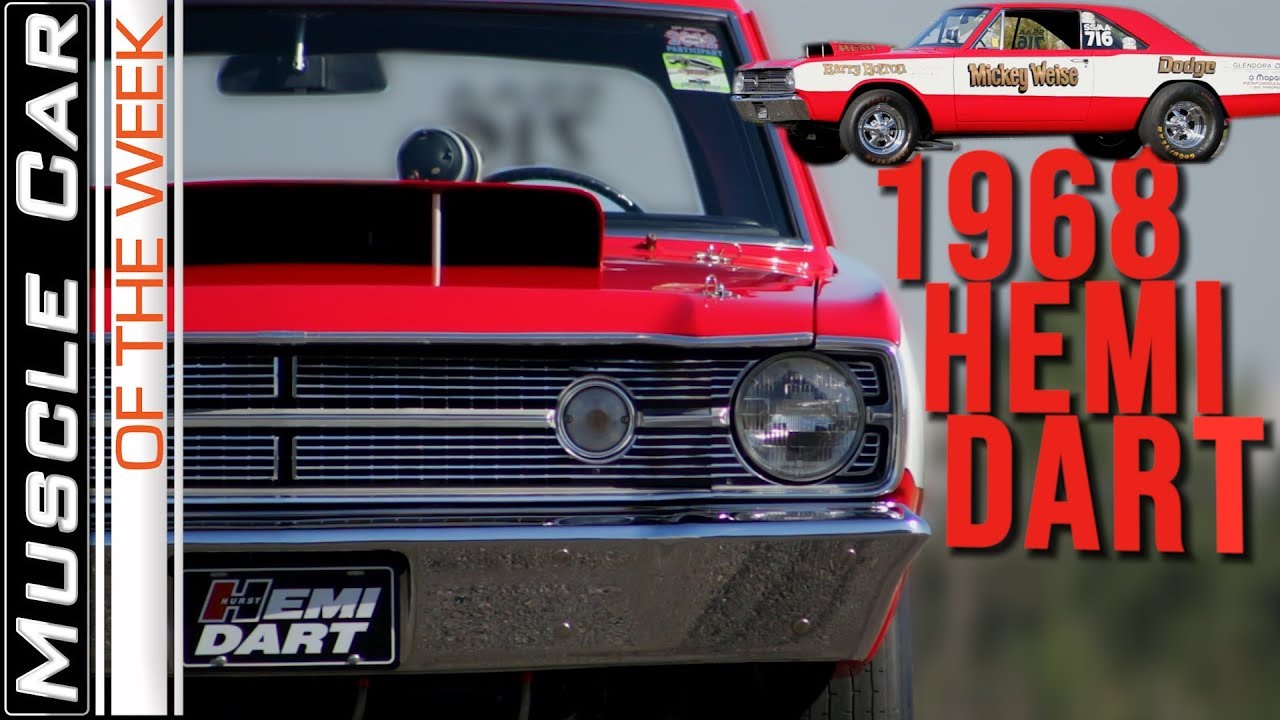 There were about 80 1968 Dodge Darts factory built with the 426 Hemi V8, and this one is a very well known example. Mickey Weise started off drag racing a big-block Camaro back in the day, but when the 426 Hemi cars were passing him at the big end of the drag strip, he eventually made the move to Dodge, first in a bigger ‘65 A990, and finally taking over his partner’s ‘68 Hemi Dart that we see here today.

Hemi Darts are a special breed, for sure. They were pulled from the Hamtramck, Michigan assembly line as unfinished 383 powered Dart GTS cars, then were sent to the Hurst
Performance Research Facility for the option code LO23 conversion into the lightweight drag strip warriors you see here today. They were designed to compete in the white-hot NHRA Super Stock drag class, and were put on a healthy diet to remove excess weight wherever possible. The new fenders and hood were fiberglass, and the doors and bumpers were submerged in Nitric Acid, a process which thins and lightens the steel panels. Glass was swapped for lexan panels, and the standard Dodge van seats were swapped after the interior was gutted of everything from the radio and heat to sound deadeners and even window regulators. The weight savings was substantial, as a Hemi Dart tipped the scales right at 3000 lbs.

The quarter panel wheel openings were enlarged to accommodate oversized racing slicks, and the work was done quickly and fairly crudely. The rear leaf springs were moved inboard to make even more room, and the Dana rear axle was stuffed with 4.86:1 gears when coupled with the 727 Torqueflite automatic transmission like this car has. Manuals were also built, but the 2600 RPM stall converter in the strong and reliable torqueflite made for consistent passes, and minimized the risk of over-revving the Hemi while wrestling with the New Process 4-speed manual.

The cars were delivered in gray primer with the fiberglass parts in black gelcoat, allowing racers to paint them as they wished. This one evolved from being painted gold and white – the beginning of a candy-red paint job, but they ran out of time after spraying the gold base and didn’t get the red done in time. After a few seasons, it was completed in red and white with some cool lace graphics, but today has been repainted solid red and white.

These cars did what they set out to do, and Mickey recalls going 10.19 at 132 in 1972. Chrysler backing dried up at that time, so Mickey stored and eventually sold the car, but got it back in the 1980s and ran it again until 2000 when it landed a spot in the NHRA Museum in Pomona, CA, and also a Hot Wheels car tribute. 50 Hemi Darts were slated for production, but sources say there might have been 82 actually built. Today, Mickey’s Dart is a revered rock star of The Brothers Collection.