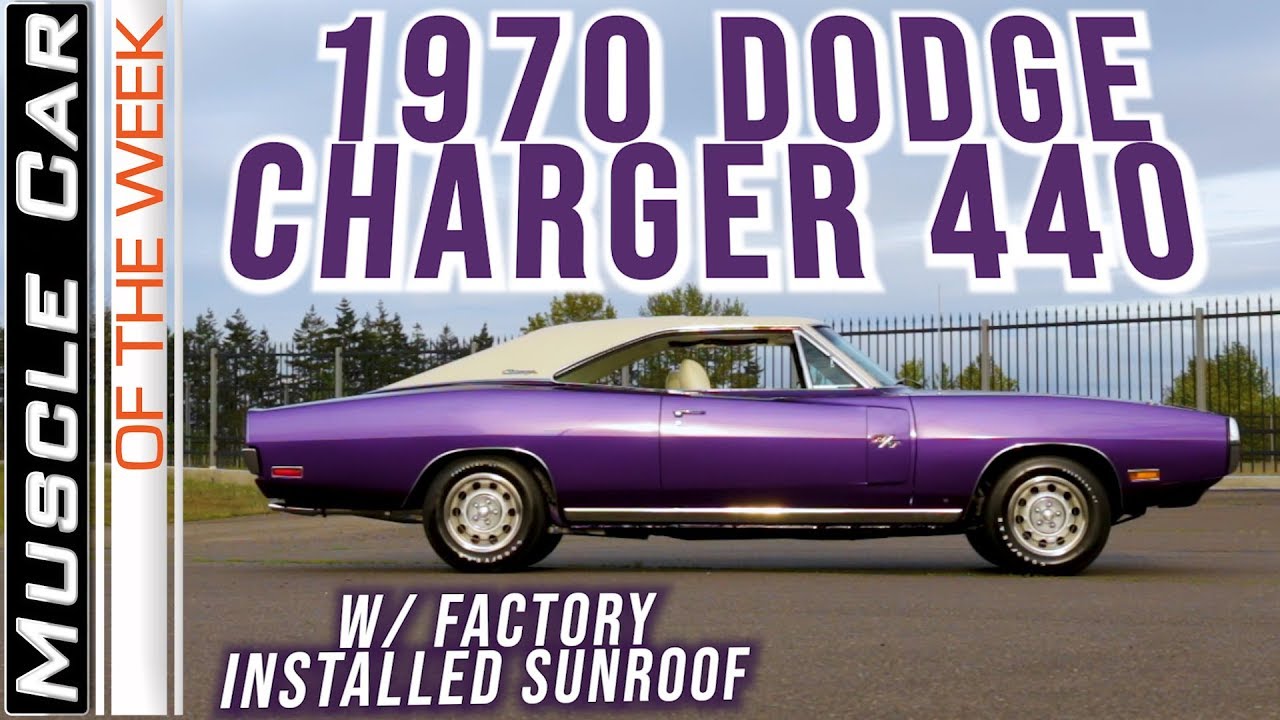 This 1970 Dodge Charger features a 440 6-Pack under the hood, a 4-speed gearbox, and a factory installed sunroof! The sunroof wasn’t actually installed on the assembly line when the car was built, as Dodge pulled cars from the line and sent them to subcontractor American Sunroof Corporation or ASC to do the installation of the sunroof, and then the car was returned to the plant for final assembly. So it was an option you could order when buying your new Charger, and only 112 1970 Charger R/Ts were built this way. Part of the reason for the low production was the cost… the big hole in the roof added $461.45 to the price of your new $3700.00 Charger, so it was quite a chunk of change to see the stars at night. BUT, a convertible was never offered in this body style, so for those who liked to be closer to nature while burning rubber, this was the next best thing.

But this car is far more than just a sunroof oddity. The whole thing is awesome, starting with the stunning Plum Crazy Purple and white color combination. The vinyl top was mandatory with the sunroof cars, and we really dig the white over white interior. The hood is partially blacked-out with the 440 call-out, and chrome pins keep it latched at high-speed. 1970 was the last year for this Charger platform that debuted in 1968, with the signature 1970 change being the chrome bumper surrounding a horizontally divided grille. The tail light became a one-piece looking ordeal, but hey didn’t change much else on the car… after all, why would you mess with a nearly perfect shape?

Specs on the Charger R/T 440 Magnum include a 375 HP rating from the 10.1:1 compression, all iron big block V8. These breathed through the 6-pack system of 3-2 barrel carbs, and a hydraulic lifter cam kept things fairly smooth while still developing 480 ft. lbs. of torque. The driver was in control of the revs on this one through the 4-speed manual transmission topped with the always cool pistol grip shifter. A 3.23:1 rear gear is a great compromise between off-the-line go and good highway cruising RPM.

The white interior featured leather seating surfaces on the high-backed bucket seats, and a cool full-length console framed out the 4-speed handle. We also dig the steering wheel in this one. The dash is stuffed with the Rally gauges, with a still-running 8000 RPM tic-toc-tach beside a 150 MPH speedo. Note the 88,000 plus miles on this one… it was not a garage queen. Fuel, temp, oil pressure, and alternator gauges are to the right, and heat and AM tunes round out the wood-grained dash. The sunroof action happens with an overhead power button.

Charger R/T suspension was a bit tighter thanks to different shocks and torsion bar tuning, with front disc brakes, rally wheels, and raised-letter tires. These cars had a great stance, and they handled the road with stability and comfort. After all, that’s what the R/T package was all about.