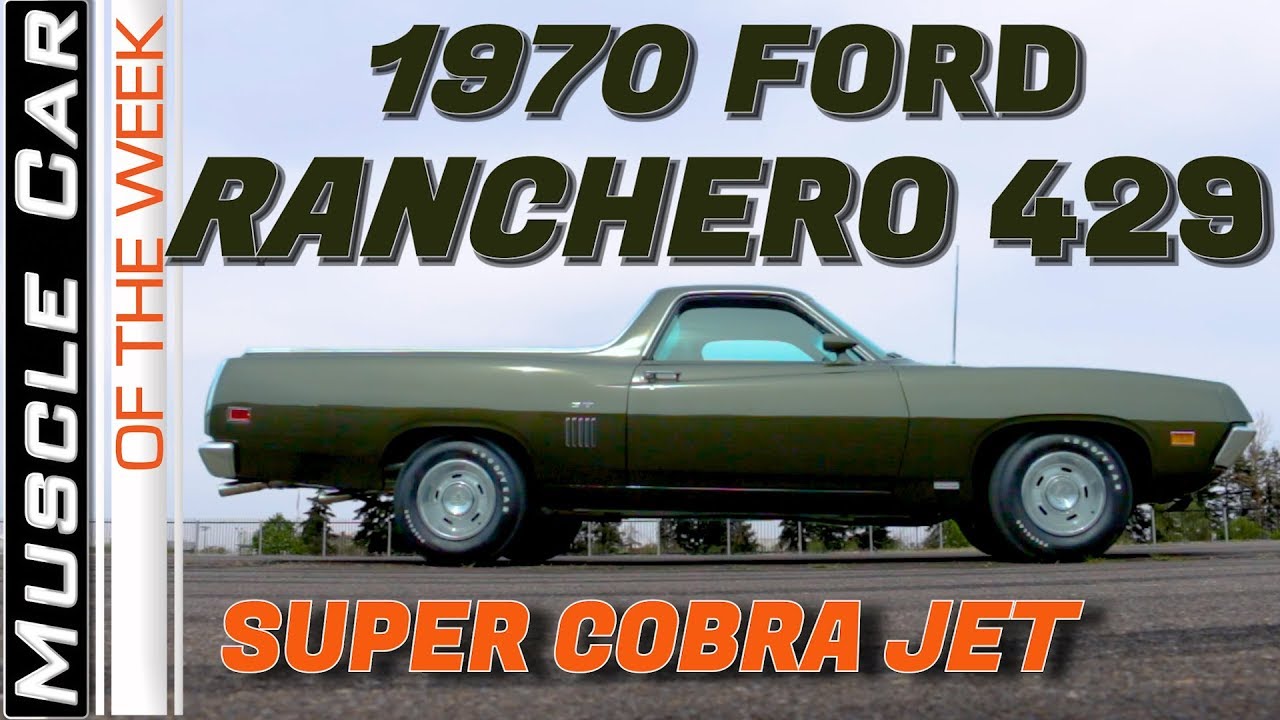 Ford hit a home-run when they launched the ranchero back in 1957, and the popular car / truck became a staple for businesses and individuals alike. We think it’s cool that some seriously high performance versions slipped out, like this ‘70 built with a 429 Super Cobra Jet and a Drag Pack!

What was intended to be a utilitarian, personalized pick-em-up truck, sometimes ended up being the hottest car on the street. And while high-performance Rancheros were nothing new in 1970, as evidenced by the factory 312 supercharged ‘57 Ranchburner we showed in episode 15, or the blue ‘68 Cobra Jet from episode 79, this one is probably the highest of the hi-po Rancheros.

1970 Rancheros are largely similar to Torinos, save for the bed box in place of a set of doors or a fastback roofline. Up front, they all share the same sheet metal and suspension, so it only makes sense that the hottest Torino performance engines fits right in. In this case, we’re looking at the 385 series 429 Super Cobra Jet, in all of it’s Ram Air and Drag Pak glory.

The “super” part of the package actually starts out back, with a 3.91 or 4.30 rear gear. These cogs ended up spinning the engine faster at high speed, so Ford beefed up those versions with a 4-bolt block, forged 11.3:1 compression pistons, bigger valves, a solid-lifter camshaft, and a Holley carb breathing through the functional Cobra Jet shaker scoop. The giveaway is the finned oil cooler mounted on the radiator core support, which helped keep 429s guts happy at high RPM. The result is a factory rating of 375 HP and 450 lbs. ft. of torque, all going through the toploader 4 speed and up in tire smoke out back.

The 429 Super Cobra Jet engine is one of the coolest looking plants of the era, with aluminum finned valve covers and the sinister finned shaker scoop, and it all plays into the sharp styling of the ‘70 Ranchero GT. Ours is dipped in Dark Ivy Green and the full-width eggcrate grille awakens to reveal hidden headlights. The lines are crisp, with a set of gills on the lower quarters just below GT emblems, and a discreet 429 badge down low on the fender.

You’d better have your load strapped down tightly if you’re hauling the goods in this Super Cobra Jet Ranchero… or maybe wait until after work to go mop the streets with the competition. Thanks for hanging out with us here in The Brothers Collection, we’ll try to find another cool car to share next time, on Muscle Car Of The Week.