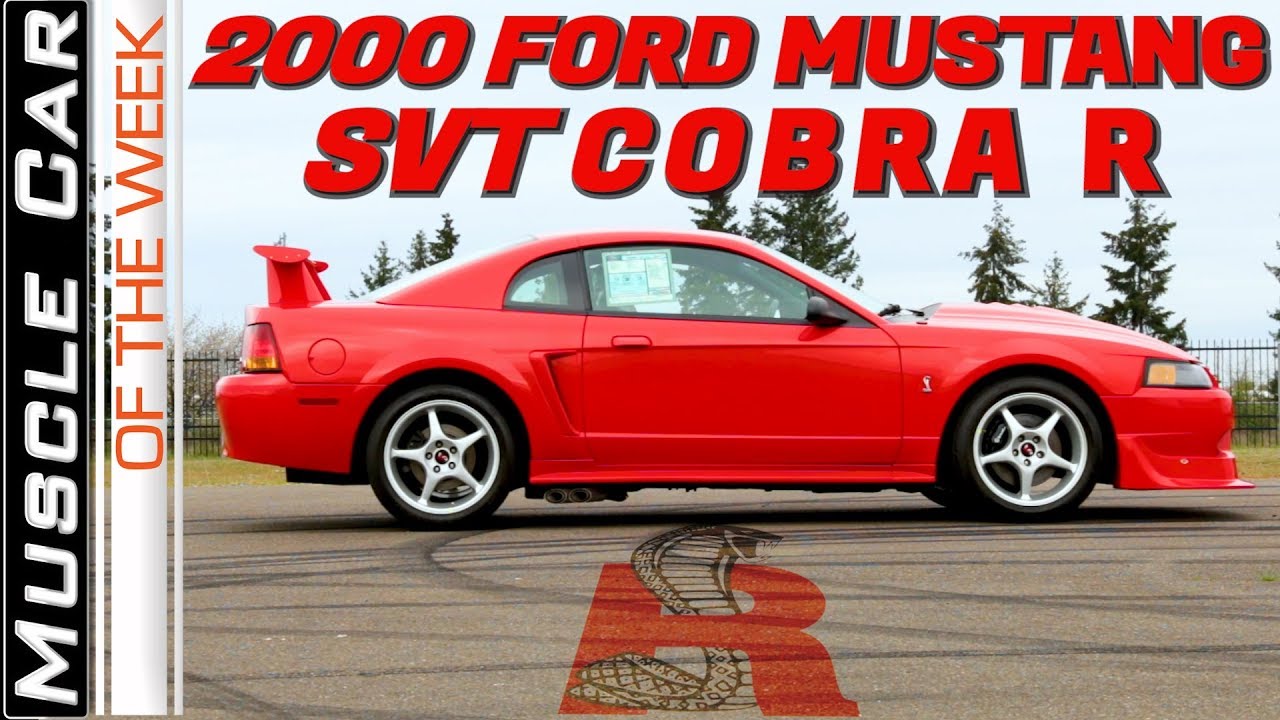 The 2000 Ford Mustang SVT Cobra R is not just regular Mustang with a wing and a set of wheels. Oh no, buddy. The Cobra R was completely engineered with hand picked parts to be a great performer on the street or track.

While the stock Mustang GT was powered by a 4.6 litre V8 and remained true to the same basic formula since it’s introduction, the 2000 SVT Cobra R represented the closest factory-built racer ever. It used a special 5.4 litre V8 engine, a 6-speed manual transmission, and a parts catalog full of goodies to go fast, turn hard, and stop like a track car should.

It didn’t look like your typical Mustang under the hood. Air is sucked in through the hi-ram intake, compressed in the 5.4 liter engine by forged pistons, Carillo rods, and a forged crank. High-flow 32 valve heads and shorty headers send the smoke down the pipes, leaving 385 HP in its wake.

That 385 HP peaked at 5700 RPM, with it’s 385 lbs. ft. torque rating coming in at 4250 RPM.
Cylinder heads were Lincoln Navigator units, and the engine required a revised domed hood for clearance.

A Tremec T-56 6-speed manual is the only transmission offering in the R, and the 3.55:1 rear gear spins the independent rear suspension… a first in a Mustang. These cars were good for 0-60 times in the mid 4-second range, with the quarter mile flags waving in just 12.9 seconds with 110 MPH trap speeds.

Cobra R drivers didn’t need or want luxury items weighing down their ride, so the Cobra R is fitted with necessities only. You won’t find a high-powered stereo, air conditioning, or other fancy stuff inside; just the needed instrumentation and controls to rock the track. The dash features a 180 MPH speedo and 8000 rpm tach, but interestingly, non-numbered gauges for temp, oil pressure, fuel, and volts. I guess Ford figured you’d add a set of numbered gauges if you were serious about racing. Recaro seats keep the driver’s keester in place when wheeling the R around the track, but the rear seat was ditched to save weight.

The 2000 Cobra R sits low thanks to dropped Eibach springs and twist-resistant oversize sway bars, and Bilstein shocks and struts. Adding to the outstanding handling is a 2000 Cobra R exclusive independent rear suspension… something standard Mustangs didn’t get until 2015.

Cobra R’s rolled on 18×9.5” aluminum wheels wrapped in BF Goodrich g-ForceKD 265/40ZR-18 tires that were specially designed for the car. Retina-detaching brakes were 13” vented rotors with 4-piston Brembo calipers up front, with 11.65” rear rotors out back. Braking performance is a great match to the acceleration capabilities of the R.

The rear spoiler is the obvious indicator of a Cobra R, but these cars have several other body mods as well. We mentioned the Power Dome hood, and the lower front fascia is also unique to the Cobra R. Side exhaust tips peek out of the Ford only built 300 2000 Cobra R’s, and this is one of the newest remaining, with less than 2000 miles on the odometer.

The wing might look a little extreme, but it has a purpose on this 170 MPH capable Cobra R. Is this Cobra your speed? Share your thoughts on this one or any of the cars here in The Brother’s Collection, we’re happy to hear ‘em. Thanks for watching, and we’ll see you next time!