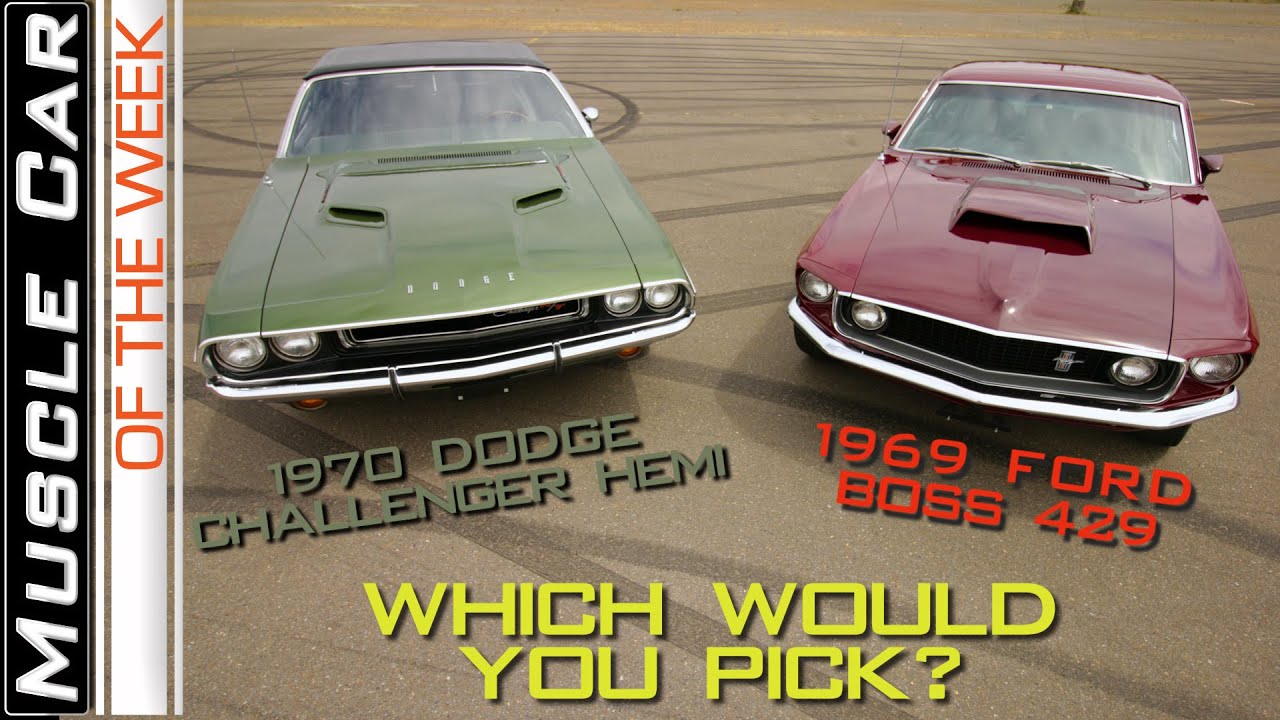 Today, we’re taking a look at two Muscle Car Icons… a 1970 Dodge Challenger 426 Hemi Convertible and a 1969 Ford Mustang BOSS 429. We’ve shown each of these cars individually, but chose to look at them together this time to see how these two very different cars both rose to the top of the Muscle Car ladder.

The Challenger was marketed towards the upscale, personal luxury crowd, even with the 426 HEMI engine under the hood. Challengers are comfortable and feature-rich, looking to edge out the Mercury Cougar in the marketplace.

The Mustang BOSS 429 was an entirely different animal, developed as the street-going carrier of the NASCAR-bound BOSS 429 V8 engine. It was a big project, as the giant Boss ‘9 engine didn’t fit in the stock Mustang’s engine bay, so Ford worked with contractor Kar Kraft in Dearborn, Michigan to make the necessary modifications to accommodate the big 429. Redesigned front sheet metal was needed to move the shock towers outboard so the Kar Kraft team could install the engine. Every extra inch was needed, so the battery was moved to the back of the car, which also helped shed some weight off the nose. The front suspension was tuned up with different springs and a stiffer sway bar to manage the additional weight, power, and performance of this specially built Mustang.

On the other hand, the Challenger’s engine bay was designed to accommodate the 426 Hemi headed V8 from the beginning. The car was a fresh design for 1970, and one of the goals was to be able to fit any of the Chrysler engines under the hood, from the long slant six up to the 440, and the 426 Hemi was the widest of the bunch by far. The Challenger is 4.4 inches wider than the Mustang, but even so, the Hemi is a tight fit. The 426 Hemi is another engine that had to be sold to the public to remain legal in NASCAR racing.

Driving these two cars are very different experiences, with the cushy Challenger winning on a comfort and ease-of-operation standpoint. That wider body means more room inside, and amenities like power steering, power brakes, torque-flight automatic transmission, AM/FM radio, and a full gauge package in the dash make it an easy driving ride.

The BOSS 429 is far more high-performance in feel, with manual steering, a 4-speed manual transmission, but it did have power brakes and an AM radio. The suspension is stiffer on the BOSS, and we believe it was also the first Mustang to receive a factory installed rear sway bar.

While the 426 Hemi was rated at 425 HP and 490 pound feet, the high-revving BOSS 429 was only given a 375 HP rating, and most consider that a low-ball. Both engines had huge valves and free flowing combustion chambers that liked high RPM usage, and both are easily modified to significantly raise their power output.

These cars are at the pinnacle of Muscle Cars for all the right reasons… high power, low production totals, with 857 ‘69 BOSS 429s built and only 12 ‘70 Hemi Challenger Convertibles, but they are also valued because they are just really cool cars. And while they really don’t compare from a function or market standpoint, we thought it would be fun to share two of the most drooled-over cars from The Brothers Collection in one episode.

While nobody could have predicted the astonishing values of these cars decades on, we have no doubt that people recognized that were both very special cars!