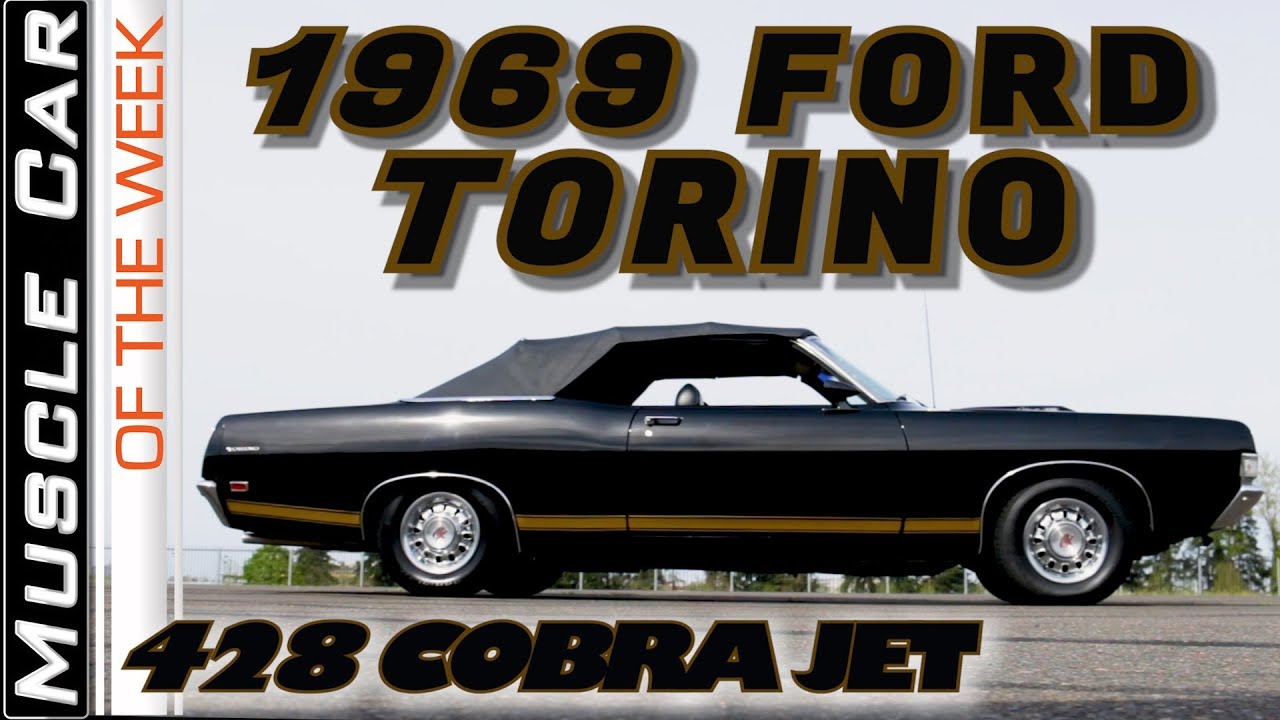 While many of the cars here in The Brothers Collection appear new or nearly new in condition, there’s a place for those who’ve been driven over the years. This super cool 1969 Ford Torino GT is a great example, and who wouldn’t want to drive a 428 4-speed convertible every day?

You gotta love cars like this 1969 Ford Torino GT, with all its well-earned flaws and wear accumulated over 90,000 miles of gear-shifting, top-down, Cobra Jet powered fun. The look is spot on, as triple-black big-bodied Muscle convertibles always look menacing, and the GT details add to the attitude of this street brawler. The gold lower GT stripe brings a bit of race car imagery, but by keeping it on the down low, the car maintains a serious appearance. Chrome styled-steel 14” wheels are similar to ‘69 Mustang wheels, as are the painted racing mirrors.

We particularly dig the hood scoop, which is again very similar to the Mustang scoop of the time, complete with rear-facing turn signals for a head-up display of sorts. And that scoop is the real deal, with a functional ram-air setup helping the 10.6:1 compression 428 Cobra Jet V8 to crank out 335 HP and 440 pound-feet of torque. It’s hooked to a 4-speed manual transmission for good shifting fun, and for dumping the clutch and making lots of tire smoke on command. And if you think that 335 HP sounds low for a hot-cammed, heavy-breathing big block, you’re not alone. These CJs were known to make closer to 400 HP, but it’s believed Ford fudged the numbers to give 428 CJ Mustangs a better power-to-weight spec for NHRA competition.

This car was sold new at Spitler-Demmer Ford in Wayne, Michigan for $4337.75, and according to the Marti report, there were less than 200 similarly equipped ‘69 Torino GTs built in ‘69.

Sitting in the big Torino GT is like easing into your favorite lounge chair… the upholstery is stiff from over 5 decades of elements, but it feels right. A white-knobbed 4-speed handle emerges from the full-length console. The dash layout is clean and easy to read, and this one features an AM/FM radio installed from the factory. Oh yeah, the clock still works, too. GT cars had a sportier suspension system for more road feel, and disc brakes bring things to a halt.

This Torino has seen some paint work, but is largely original and unrestored, and we like it that way. You can often tell when a car has been taken apart and put back together, as some are never as nice as the first assembly. This 428 Cobra Jet convertible is a great example of one that is right on, just the way it is.

As enthusiasts, we look at cars like this with awe and reverence, but to most, it’s just an old used car. Can you imagine stumbling across this one parked under a used car lot sign? THAT would be a great day. Thanks for watching, don’t forget to subscribe, and we’ll see you next time on Muscle Car Of The Week!