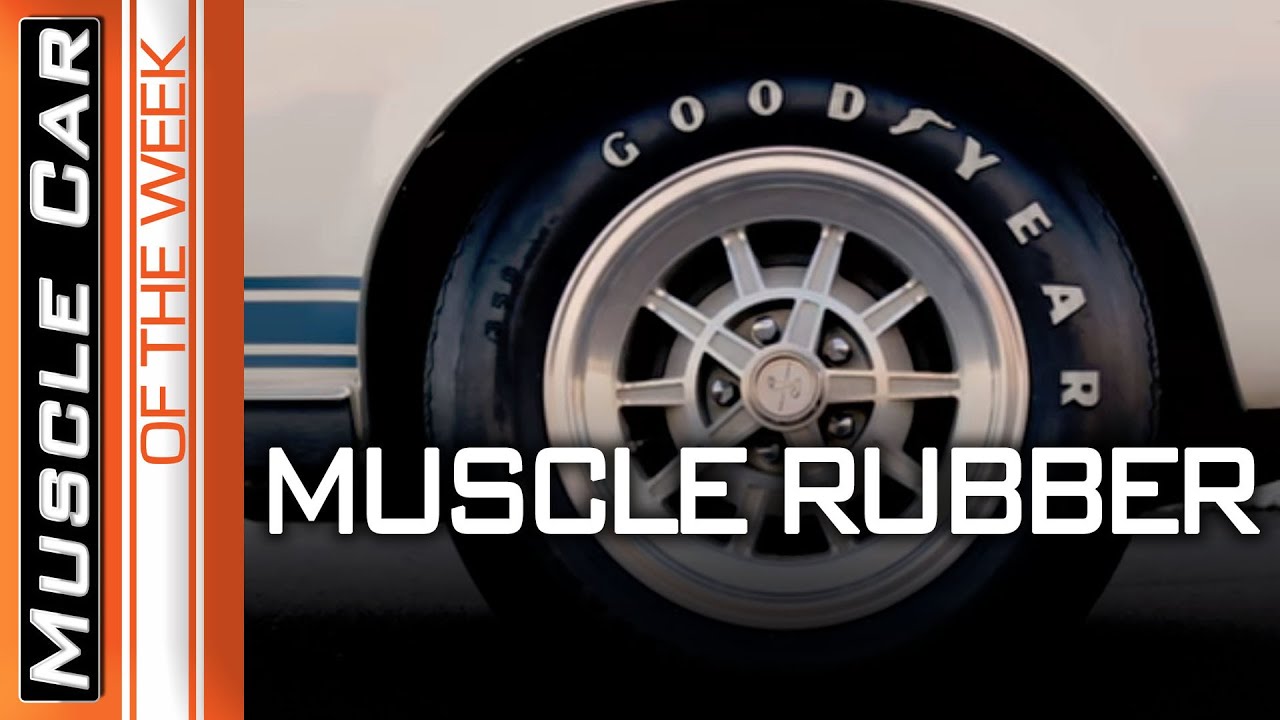 They say it all happens when the rubber meets the road… either you go up in smoke, or you hook up and win the race! Muscle Cars have evolved tremendously since the 1960s, with tire technology making some of the biggest advances. This time, we’re taking a look back at some of the skins you could get on first generation muscle cars.

Tires were more of a necessity and a safety item in the mid 1960s. Tire companies went out of their way to advertise traction in poor weather conditions, like deep snow, heavy rain, and slick ice. Check out the Frank Sinatra look-alike in his ‘67 Fairlane 500 sporting Firestone Wide Ovals in the snow! Come to think of it, we rarely see snow tires even advertised anymore, as most tires are of the all-season variety. In 1965, you swapped on snow tires or even studded rubber for the winter.

But as the performance of Muscle Cars began to take off, tire companies saw a need for hi-po rubber to match. In those days, tires were constructed using a bias-ply design, where reinforcing cords ran diagonally across the tire’s section width, forming the buldged-out sides and crew-cut flat tread surfaces. 1965 Shelby GT350 Mustangs came equipped with Goodyear Blue-Dot specials, advertised to handle 130 MPH. (Ep 17 for b-roll of Shelby & tires) While these might have been considered high-speed skins, their narrow width looks more like a pie-tin than a race tire.

Wide white wall tires gave way to white pinstripes, which turned into red lines in the mid 1960s. ‘65 Corvettes even offered gold stripes with knock-off wheels, and blue stripes appeared as well. Some tires featured multiple white or red stripes, with the ‘65 Thunderbird having both red and white lines. Redline tires have always suggested high-performance.

But the next craze in tire design was the raised-white-letter style, often times calling out the size, and also advertising the tire company on the sidewall. Tires were starting to become fashionable, as this outrageous ad for Goodyear Wide Tread GTs – or Wide Boots as they call ‘em! THAT, is an awesome tire commercial.

Goodyear and Firestone were in a racing tire battle, and they took it to the streets with the Goodyear Polyglas and Polyglas GT versus the Firestone Wide Oval and Wide Oval 60s.

Goodyear Polyglas tires were introduced in 1967 and combined the polyester cord material with fiberglass belts under the tread, and were factory installed on the Pontiac GTO, Dodge Charger R/T, Ford Mustang Mach I, and Chevrolet Camaro Z-28.

This spot featured an AMX, and the “squirm fighting” Goodyear Polyglas tire, note the Spyder Motor Wheel used in this commercial!

Goodyear Polyglas GTs were similar, but in the shorter 60 series sidewall ratio for better cornering.

Atlas tires were Esso gas-station replacements, but their Mark IV featured redline styling and decent performance for the price.

Bias-ply designs evolved to higher-technology radial tires, with steel cords going straight over the top of the tire from rim edge to rim edge. These provided better cornering and wear resistance. Popular tires included names like Goodyear Eagle, Pro-Trac, and Firestone 500, among many others. Problems with the Firestone 500 coming apart triggered massive recalls and almost buried the company in the 1970s. Perhaps the most popular raised-white-letter Radial is the BF Goodrich Radial TA.

Some of these cool vintage bias-ply tires are reproduced today, but many are original on some of the cars we’ve featured from The Brothers Collection, like the Goodyear Blue Streaks found on the 1968 Shelby GT500 from episode 249 of Muscle Car Of The Week.

I once was chatting with a tire executive, and we both agreed that burning rubber is one of the best smells for gearheads, but for different reasons. For me, it was the thrill of speed and racing. He just said “Tire smoke smells like money.”

We hope our look at vintage Muscle Car rubber didn’t tire you out… don’t worry, we’ll be back with something else cool from The Brothers Collection next time on Muscle Car Of The Week!