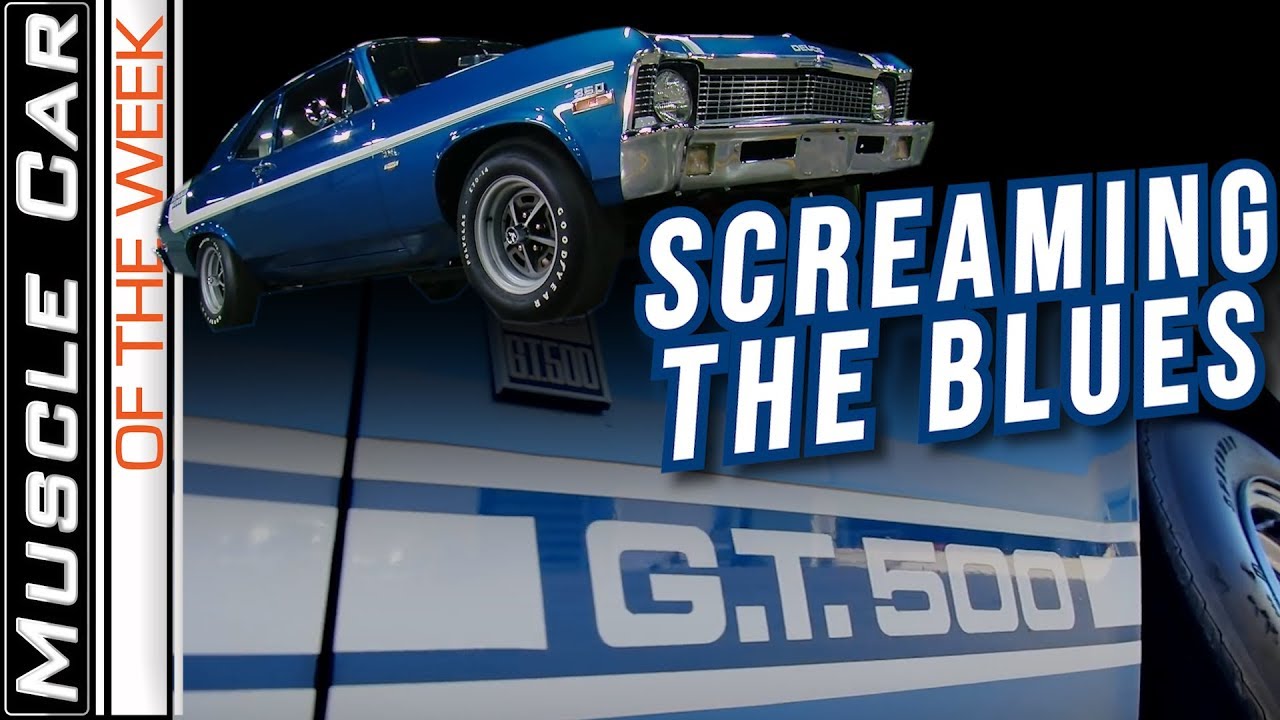 On this episode of Muscle Car Of The Week, we spotlight some of the best Blues on Muscle Cars in The Brothers Collection, including a 1969 Dodge Charger Daytona 440 wearing EB5 Blue Fire, a 1967 Shelby GT500 427 Side Oiler in Acapulco Blue, a 1971 Pontiac Firebird Trans Am 455 HO in Lucerne Blue, a 1967 Yenko 427 Camaro in Deepwater Blue, and a 1970 Chevrolet Nova Yenko Deuce in deep Fathom Blue. Kevin is also a big fan of Blues music, so we chose some cool blues tunes to provide the soundtrack.

First up is one of our all-time favorite blue colors, Dodge code EB5, named Blue Fire! And man does it look hot on this 1969 Dodge Daytona! The car was featured in episode number 166 of Muscle Car Of The Week, but the Cliff’s notes is that it’s powered by a 375 HP 440 cubic inch plant clamped to a Torqueflite automatic transmission. And it’s got the blues for sure, complete with a color-matched interior. A black Daytona stripe wraps the giant spoiler and tail, and redline tires break it up a bit. It’s a super cool street NASCAR in a great color.

Next up we’re plunging into the depths of Deepwater Blue as applied to this stunning 1967 Yenko 427 Camaro. This one is pretty subtle for a Supercar, but not quite a sleeper thanks to the white nose stripe, RS trim package, and rally wheels. A hydraulic-cammed 427 is a bit unusual for a Yenko, which are normally solid-lifter equipped, but it still made 410 horsepower when it was time to get down to business. You can see the whole story on this car in episode 199 of Muscle Car Of The Week.

Pontiacs have always had some cool blue options, including the well worn Lucerne Blue as seen on this 1971 Trans Am from episode 220 of Muscle Car Of The Week. The factory white stripe stands out against the thick black frame, and we see a small Firebird on the nose, long before it would become a big bird on the hood. This one makes tire smoke thanks to a high-torque 455 HO V8, a plant that relied on a big cam and advanced head design to move lots of air on demand. This is an unrestored car that has the look and power to match.

Our next blues cruiser is a 1967 Shelby GT500 wearing a deep shade of Acapulco Blue with Wimbledon White stripes. This has been one of our most popular cars featured from The Brothers Collection, and not just because of it’s awesome looks and Shelby mystique… this one is stuffed with a 427 V8 under that scooped hood, rather than the standard issue 428 offered when new. You can learn what a difference one cubic inch makes and see more of this GT500
in episode 179 of Muscle Car Of The Week.

And finally, we’re diving deep back to episode 150 of Muscle Car Of The Week featuring a hot 1970 Chevrolet Nova. Not just any Nova, but a screaming LT1 powered Yenko Deuce Nova. This one is wearing a deep shade of Fathom Blue surrounding crisp white stripes. These cars were screamers, knocking down low 13 second quarter mile times thanks to the high-revving LT1 350 and the Nova’s light weight. And here’s another deep thought… in addition to Fathom Blue, Chevy also had a Fathom Green. For some reason, this one reminds me of those late nights in smoky blues joints.