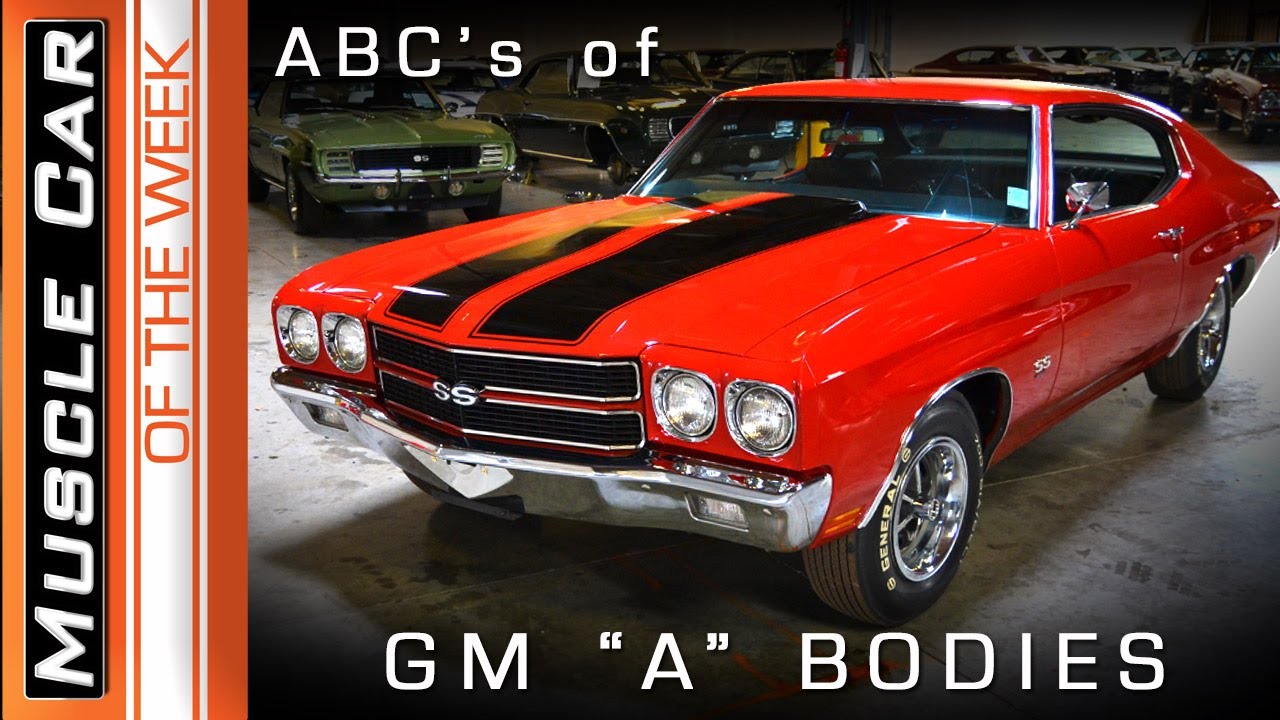 There are lots of terms thrown around in the Muscle Car world, but people often refer to a particular car by the name of the platform on which it was built. Today, we’re taking a look at the GM “A” body platform and the Muscle Cars they became.

Auto manufacturers use different letter codes to name car platforms, especially when the platform is going to be shared across several brands. In this case, the “A” body we’re referring to is the midsize car platform that debuted in 1964. This was a new chassis design, with a full perimeter frame, independent “A” arm front suspension, and a triangulated 4-link rear coil-spring suspension design for good traction, comfort, and performance.

Much of the platform’s underpinnings were to be shared among the different brands, like the chassis, suspension, brakes, steering, electrical systems, and window glass. However, the exterior styling and interior designs are unique to each GM brand that offered the cars. This strategy allowed for an efficient way to share the manufacturing costs, but still deliver distinctive cars for each brand.

“A” body cars were built by Chevrolet, Pontiac, Oldsmobile, and Buick. The models included:

The vast majority of these cars were family sedans and station wagons, in both 2 and 4 door configurations. But the time was right for a performance versions as well, and Pontiac paved the way in 1964.

The 1964 Pontiac GTO is considered by many to be the first muscle car, using a definition that a muscle car is a midsize 2-door family car with the largest, most powerful engine available and a performance driveline and suspension package. The ‘64 GTO was stuffed with an available 348 HP 389 V-8 and a 4-speed transmission, and was marketed to performance-hungry kids looking to have a hot rod without having to build one.

Oldsmobile scrambled to turn their police package into the 4-4-2, with a 4-barrel carb, 4 on the floor shifter, and dual exhausts, and initially even offered it in a 4 door!

The ‘65 Chevrolet Malibu SS396 was an amazing car, with a performance package known as RPO Z16. This bought you a the 11:1 compression L37, 375hp 396 V8 hooked to a Muncie 4-speed. The rear was a heavy-duty 12-bolt from the full-size cars with oversized brakes, and the front featured stiffer suspension and quicker steering. Interior goodies like bucket seats, dash tachometer, and a multiplex stereo made them more fun to drive.

Also new for ‘65 was the Buick Gran Sport, a hopped-up Skylark featuring the 325 HP 400-cube nailhead V8… they called it a Howitzer with windshield wipers.  They offered great torque and handling, but a luxurious Buick experience to go with it. Each year the performance A-bodies got hotter as the horsepower wars were on.

The “A” body platform was revised for 1968, with a slightly shorter wheelbase and a more rounded overall style, but the underpinnings remained similar. By 1970, the Muscle Car was peaking, and the A-bodies were in top form.

We’ve only scratched the surface of performance A-bodies, but I’ve always found it interesting that with a little creativity and good old fashioned hot-rodding, a plain-jane 2-door family sedan could be turned into a fire-breathing dragstrip terror if you chose the right parts. We’re certainly glad GM allowed Chevy, Pontiac, Olds, and Buick to do just that. And although they might share some DNA underneath, each of these are unique with extremely loyal followings.

We’ve featured all of these top-dog A-body Muscle Cars from in-depth on Muscle Car Of The Week from The Brothers Collection, and invite you to take a pass through our channel to see ‘em all. Which is your favorite?