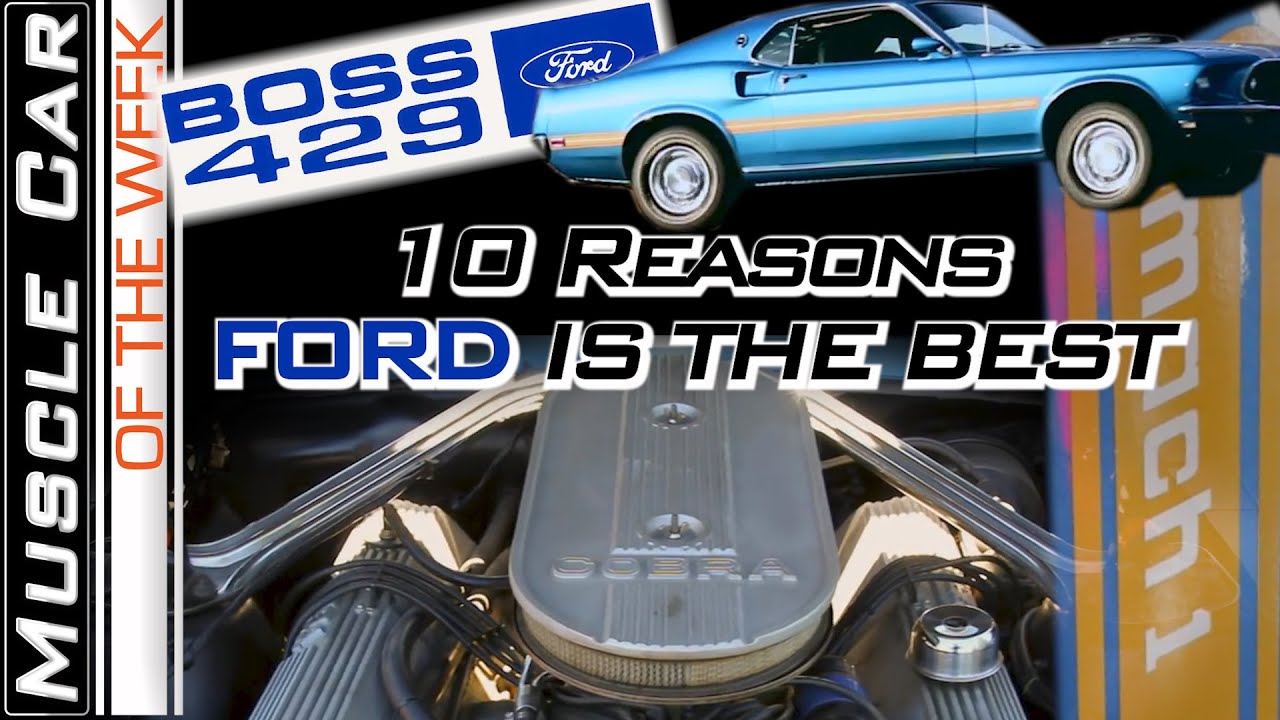 Today, we’re checking out 10 things that make Ford Muscle Cars the favorite of so many fans. From The Brothers Collection.

Ford was smart to hook up with Carroll Shelby in the mid 1960s, and we all know the outcome of that partnership. From racing Shelby GT350 mustangs to a championship at LeMans, the Shelby contributions to Ford Performance are pretty incredible. We could dedicate this whole episode to Shelby stuff, but we’ve got a lot of ground to cover, so we’re calling our #10 element The Shelby Connection.

Next up is the first appearance of the Boss on our list, in the form of a street-going version of the Mustang Trans-Am racer called the Boss 302! It was named after designer Larry Shinoda’s boss Bunkie Knudesn, and it featured a high-revving 302 cube V8 jammed with stronger parts for speed and long lasting power. Ford had to build 500 of these to compete in SCCA Trans Am Racing, and we always dig a Boss 302.

Next up is the Mach 1 package offered on Mustangs. Given the name means the speed of sound, you’d think the Mach 1 option was a performance package, but it was really more about comfort and style. Mach 1s could come with a variety of engines, of course we like the 428 Cobra Jet versions the best. Other Mach stuff included striping, special exhaust tips, cool red carpet and seat inserts in ‘69, racing mirrors, and optional spoilers. This Gulfstream Aqua car is one of only two built with a factory sunroof… you can see more of these two cool Mach 1s from The Brothers Collection in Muscle Car Of The Week episodes 9 and 244.

7. Fords in other race cars

Ford racing engines found their way into other cars, like the Sunbeam Tiger and Shelby Cobra, and for good reason. The 289 V8 was compact enough to fit in smaller chassis racers, and when the need for more speed came about, Shelby widened the snake to accept the angry 427! The result was a racer that had longer legs on the big grand prix tracks, and jaw-dropping performance on the street. The red Cobra is a 289 car that you can see in episodes 47 and 48 where we interviewed the man who raced it! The green Snake is a 428 powered street car, and it’s story is told in episode 176.

Speaking of Cobras, next on our list is the 428 Cobra Jet V8 engine. This big block powerhouse was considerably under-rated at 335 HP when it hit the streets in 1968, but the proof was how it became the quickest Mustang ever at the drag strip. Everything about the Cobra Jet is beefed-up, from the forged bottom end to the high-compression pistons and heavy-breathing heads.

Next we’re spotlighting a Ford part that has transcended the brand, an that’s the 9” rear axle. These are built tough, some with nodular iron center sections, and their design allowed for easy gear changes at the track… just drop the center out and switch it for another pre-built with different gears. The 9” name refers to the diameter of the ring gear, but they had different widths and axle spline counts depending on the car in which they were installed.

Our next cool Ford performance highlight are the lightweight racers built for drag racing! These factory-backed cars ran in Super Stock and FX classes, and featured fiberglass and aluminum panels for weight reduction resulting in higher speeds.

And now, the Boss is Back! In 1969 and 1970, Ford worked with Kar Kraft to create what many consider to be the baddest Mustang ever, the Boss 429! These featured the imposing Boss 429 engines, which used a hemispherical cylinder head design clamped in with o-rings to the new 385-series block, resulting in a screaming speedway performer for the streets.

Next up is one of the most amazing engines Ford ever produced, the Single Over Head Cam 427! This was a race-only piece that featured special cylinder heads stuffed with 4 valves per cylinder atop the FE series 427 side-oiler block. A giant timing chain kept the dual cam system in sync, and these were making over 600 horsepower all day long.

And finally, we present the 427 Side-Oiler and Top-Oiler V8s in our number one position. The 427 walked the line between a street and a race engine, with up to 12:1 compression and over 500 HP sold to the general public. These featured a high-nickel, thin wall block with steel internals for strength, and solid lifters for reliability.