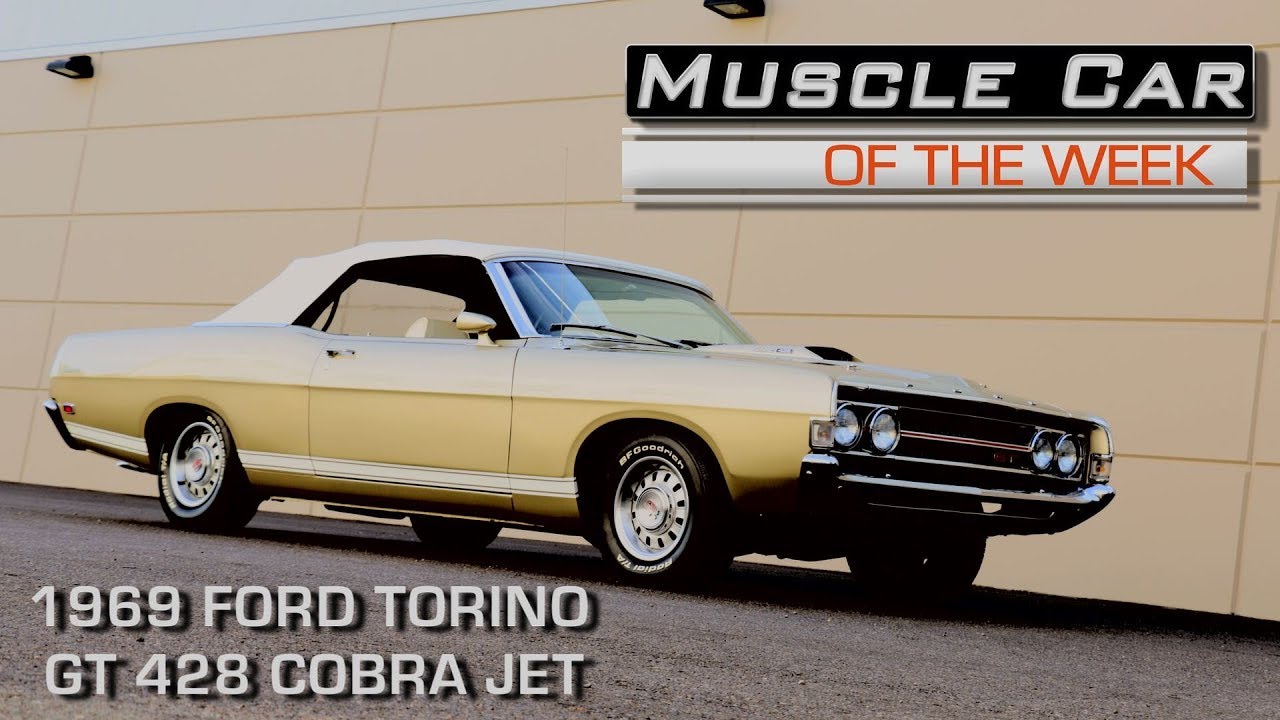 Apparently Ford felt that dull driving was a sickness in need of a cure, so when they marketed the 1969 Ford Torino GT, they were sure to point out that the car was anything but dull. Like all automakers, Ford wanted to captivate younger new car buyers, and the promise of driving excitement and fun was the ticket to the game. This ‘69 Torino not only boasts a fun-inducing power convertible top, it’s got 428 cubic inches of happy pill under the hood!

High performance car fans had tons of wicked cars to choose from in 1969, so automakers had to step up their game to compete. Ford offered the Torino, Torino GT, and Cobra, all on the same platform but delivering different levels of performance. The base engine for the Torino GT was a 2-barrel 220 HP 302, but this one came stuffed with the top-option 428 Cobra Jet V8, complete with the Ram Air package and a 4-speed stick!

This Cobra Jet convertible utilizes a functional open-air scoop to feed the 10.6:1 335 HP 428 V8 that was capable of churning up 440 pound-feet of torque at a meager 3400 RPM. Dump the heavy-duty clutch, and get ready for a new hair style!

When the 428 Cobra Jet hit the streets, everyone wondered why the horsepower rating seemed a bit low compared to the specs of the engine. A fairly high compression big-block with a performance camshaft, high-flowing air intake manifold and carb and dual exhaust should surely make over 335 HP. Especially when the lesser 390 cube version was only down 15 HP from that. It turns out that Ford seemed to have intentionally misled the world with it’s claims… specifically the National Hot Rod Association. You see, NHRA racing was hugely popular, and weekend NHRA winners sold lots of cars on Monday, and the NHRA used a formula of vehicle weight and engine size to determine the racing class of a particular car. Ford wanted the Mustang 428 Cobra Jets to do well, so they fudged the numbers a bit… giving the Mustangs an advantage. However, once stock 428 CJ Mustangs started running far faster ¼ mile times than the power to weight formula suggested, the NHRA made rulebook adjustments. However, Ford kept their power rating from the start, and the 428 CJ in our Torino GT is rated at 335… when everyone knew it was probably closer to 400 than 335.

Even without a Marti Report, it’s clear that this ‘69 Torino GT is more than just a big engine. GTs rolled on 14-inch styled steel wheels and stopped with optional front disc brakes. The ride is firm with the GT handling package consisting of stiffer springs and matched shocks, and an oversized front sway bar. Dual exhaust rumbles up and over the 9” axle housing and out the back, but these turn-downs are not original. Exterior styling was pretty tame, but the white interior, top, and stripes add some zing to the sea of champaign gold.

Torinos offered more room than Mustangs, and this GT dash is clean and informative. It is a bit weird that there is a redline on the speedometer and not the tach. But the clock still works in this one, which we always dig. You could pick AM or FM for tunes, but the drop-top offered the only A/C. The door panels read “Grand Touring”, and the 4-speed shifter wears a shelby-liked striped ball on the stick. A glance at the expansive white bench seat interior and you might guess this is a sleepy luxury ride, and not a high-performance road machine. If so, you’d guess wrong!